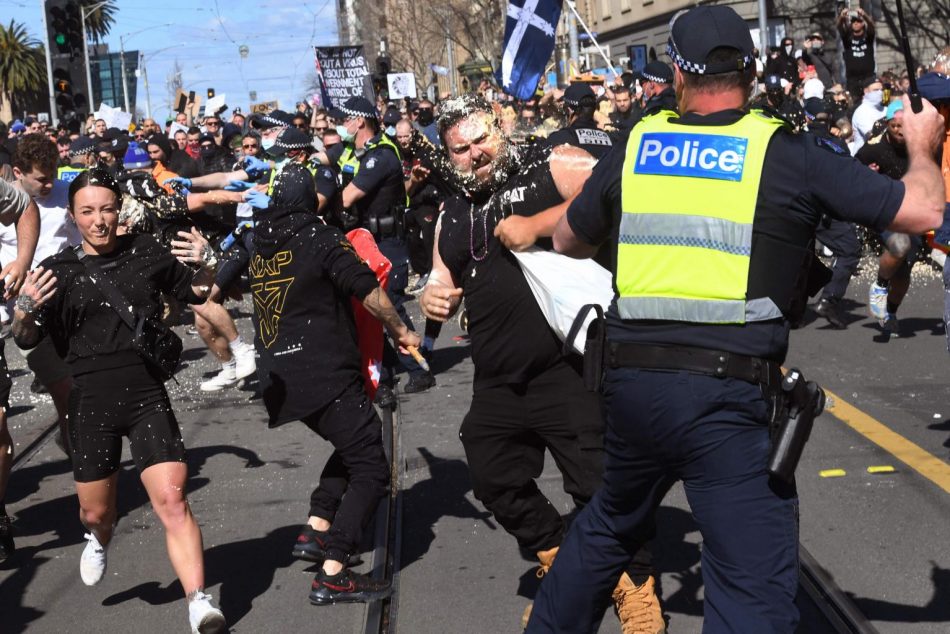 Australia has forced its citizens into its sixth lockdown in eighteen months regarding the COVID-19 pandemic. With citizens being unhappy and facing financial hardships due to constant lockdown initiatives, protests erupted across the country to show resistance against the sixth lockdown in response to the COVID-19 Delta variant. The protests have gone on for three days currently with the protests turning violent on the third day with suited riot police trying to dissipate protests in the streets.

Australian police threatened prosecution of protesters for breaking stay-at-home orders that included potential jail time and financial repercussions. In response, protesters threw golf balls, batteries, and glass bottles at police to show their current feelings towards the administration. In certain areas, police met these throwables by shooting pellets into the crowd to disperse them which resulted in over two hundred arrests occurring.

Deputy Commissioner of the ASPI, Ross Guenther, cited how they were confused with some of the protesters’ motives and claimed that some protesters were merely looking to fight rather than have a peaceful protest of regulations. The Australian Government has come out on record saying that protesters consist of mixed right-wing extremist groups rather than everyday civilians. However, many social media groups and users have spoken about their disgust about lockdowns around the world. This comment from the Australian Government in light of the widespread resentment around the world is truly strange.

Other countries around the world should take note of this situation that is unfolding in Australia. Regulations and protocols that impede on civilian freedom that governments are supposed to protect are a big no-no and can result in physical outcry if pushed too hard. Complete disregard for personal choice is damaging every aspect of the country that is taking lockdowns too far for a virus that has a mortality rate lower than other common health problems.

The information being spread is teaching people to be reliant on new-age medicine to intervene without preaching responsibility for their own health. The COVID-19 vaccine has had cases that proved that it can be beneficial, but also cases of severe side effects and people not being safe from a serious case of COVID-19. No media institutions or administrative entities have preached anything about basic health that would battle against more than just COVID-19. Physical exercise, adequate sleep, healthy diets, and healthy habits should be spoken about a lot more than what medicine is there when it is too late.

The overall conversation seems very clouded with many sources of information and opinions floating around. Luckily, there is a lot of independent research that is showing us ways to improve your immune system against COVID-19 variants. Zine, Vitamin D3, and Vitamin C have strong correlations with people that have tested positive for COVID-19. Recently, Comedian and Internet Personality, Joe Rogan, discussed how vitamins benefitted his recovery greatly as well as the use of ivermectin and monoclonal antibodies. The discussion led to a lot of false reports regarding Joe Rogan’s treatment plan even though ivermectin and monoclonal antibodies are popular forms of treatment for many diseases within hospitals.

Take a good, hard look at not only Australia’s situation but your own personal health. Make the right choices, people!